Today I'm sharing a slightly seasonally inappropriate dress. Not only is it a racerback cut, but I've also made it out of linen... I've had it on my list to make for ages and I'm glad I've finally done it! 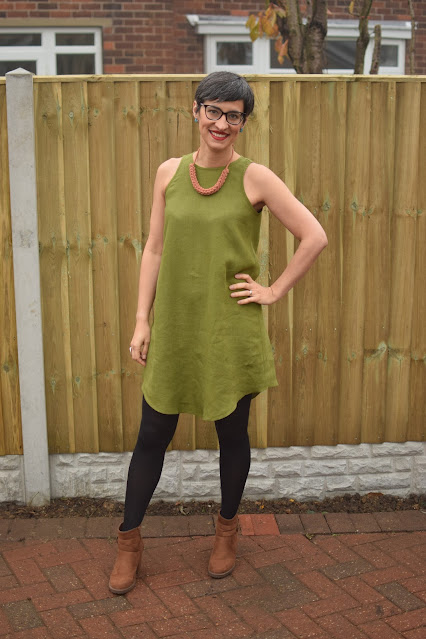 It's the Hey June Handmade Trevi dress and I'm really happy with it. The drafting and instructions are the usual high standard I've come to expect from Hey June and now I want to make the top version as well. I made a size 2 without FBA. A few of Hey June's patterns offer a version with a dart added on, for anyone who needs a full bust adjustment. Isn't that great? 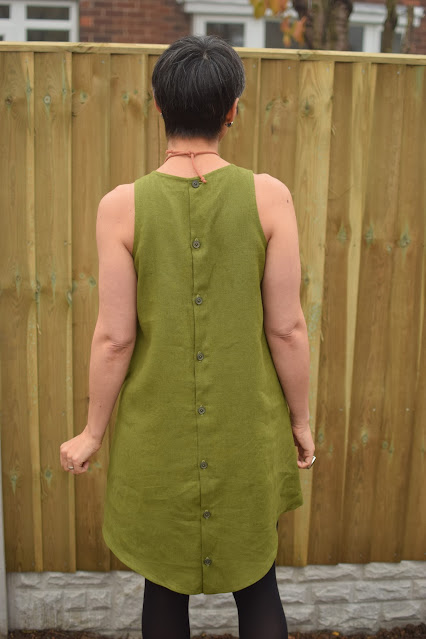 It's a very simple dress: classic shape, curved hem, racerback and look at the button back! I really love it. All the edges are finished with bias tape, which is something I enjoy doing but I'm aware not everyone feels the same way about it.
My fabric, as I've said, is linen. I got it at Merchant and Mills in the summer, when I visited with Mel. ❤ It seems softer than other pure linens I've sewn with before and the colour is so rich and vivid. 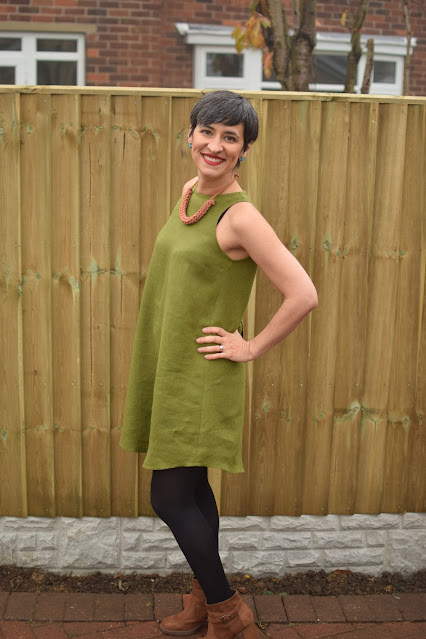 Oh, one thing I forgot to mention is that the pattern calls for 2yds of fabric for all sizes. Mine being a size 2 (the second smallest), I ended up with a full metre of surplus fabric. Yes, I only used 1m because my bias tape was made from a different fabric. So that was a little annoying but I managed to get another dress cut out of the rest.
The buttons I used were also bought at Merchant and Mills and they're cotton buttons, dyed especially to match the linen. They have them in all colours to match their linens. 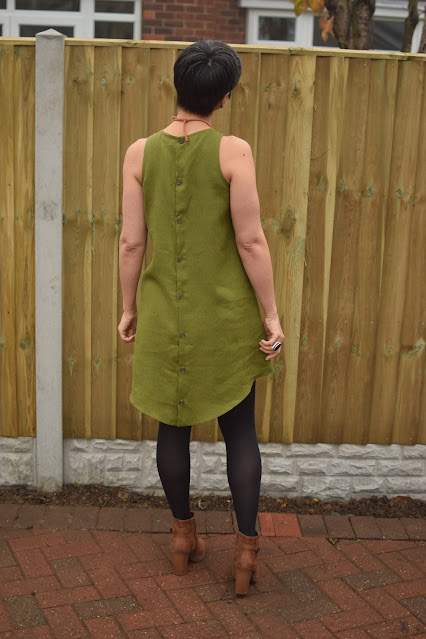 Linen is usually considered to be a summer fibre but I don't care. In fact, on the very day I finished this, Vicky at @sewstainability was talking about wearing linen all year round in this post and I think that's totally doable. It works for me with leggings, boots and a chunky cardigan as you can see below. 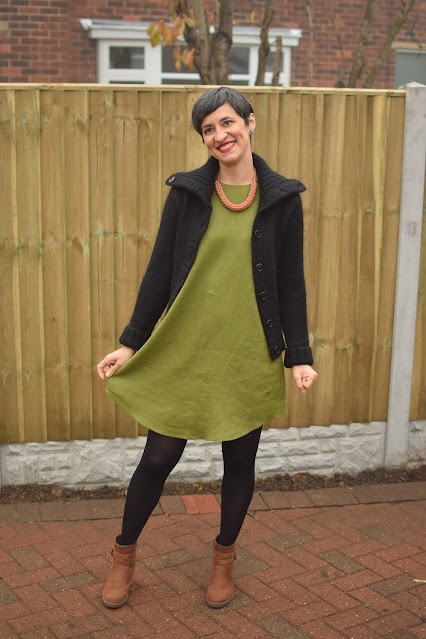 I like to make garments that I can wear throughout the year. I don't pack my wardrobe away like a lot of people seem to do. Firstly, I couldn't be bothered and I would probably end up making do with flip flops and sundresses in December. Secondly, I'm always, always cold so it takes a lot for me to wear a sundress on its own. I factor that in when I'm deciding what to sew, so most of my wardrobe works for all seasons. Obviously, I have some pieces that are exclusive to hot or cold weather but they tend to be few and far between.
How do you deal with your wardrobe and the changing of the seasons?

Popular posts from this blog

December 02, 2019
When the  Indigo dress came out I wasn't bothered. I had just bought the  I AM Cassiopée  and didn't think I'd need another smock style dress in my life. I wasn't even sure if the shape was for me at that point. I have since made the Cassiopée twice and I wear them a lot. I still wasn't convinced I needed another pattern that was so similar though. But then,  Fabricate  had a party to launch their new shop location and I wanted to attend. Obviously, I'm still on a fabric buying ban until January and couldn't buy any fabric so I bought an Indigo pattern that night instead. I am so in love with this dress!!! How can something so simple look so good? I think the fabric plays a massive part though. Ever since I saw  this chambray version  that Caroline made I have wanted to make a similar one. It just works. My fabric came from  Ray Stitch  when I visited last month. I can't find it on their website but I also can't remember the name so it may sti
Keep Reading »

August 21, 2019
A couple of months ago I was contacted by Jen from  Sew by the Sea  in Margate. She asked if I was interested in working with one of her fabrics and then sharing a post about my experience. Not being one to say no to gorgeous fabric I agreed and off I went to their website to pick something. I hadn't decided what I wanted to make yet and they have a great choice of fabrics, so it took me a while. When I saw this  Pink Floral Ravishing Rayon  by Dashwood Studio, I thought I would probably come back to it in the end. And I did. I'm a huge lover of coral. Unlike most people, I really like grey. And yellow is another favourite of mine. How could I not? I went backwards and forwards on my pattern choice for a long time. This post is actually more delayed than I would've liked, due to summer holiday disruptions. However, that turned out to be a blessing because the pattern I ultimately went with was released while we were away. I chose the newly-released  Estuary Skir
Keep Reading »

May 13, 2021
Today I'm sharing one of my recent favourites: the Opal trousers by Megan Nielsen. I really love this pattern! I'm very happy with the end result. The trousers are loose-fitting and feature an elastic waist so they're extremely comfortable. There are also options for 2 short lengths as well as trousers, patch or side seam pockets and a regular elastic waistband as well as the paper bag one I made.  I made a straight size 10 but I cut the tall leg length as I've been burned with Megan Nielsen's regular inseams in the past. I ended up taking some back off again but I can't remember if it was 1 or 2 inches. For the record, I'm not tall, I'm 5'6" but for some reason, MN's trousers have ended up too short for me in the past. Construction was really simple and quick and the instructions were great. One thing to note is that they call for 32mm or 25mm elastic. I only had 25mm so that's what I went with but that was *very* snug in the channel.
Keep Reading »