Today I have something a bit different to share. I've made Ginner something for a change!!! 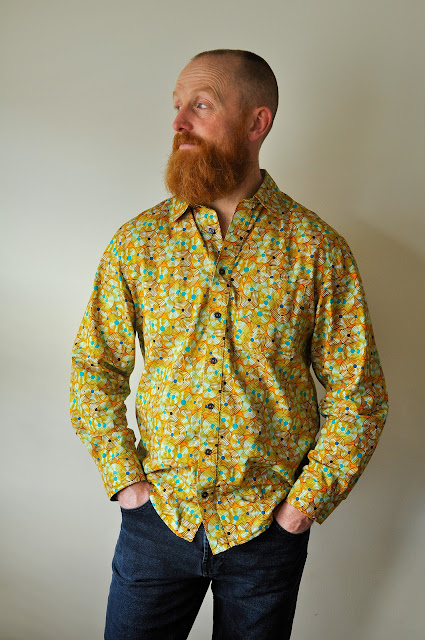 Well, actually this particular one I made ages ago. December 2017, I believe. But for some reason, I completely forgot to share it.
Ginner is partial to a loud shirt. Loud, garish, gaudy. He's all over it. We were on a camping holiday in Norfolk when he spotted this in a fabric shop. As soon as he saw it, he asked me if I could make him a shirt out of it. This was in 2014. I had only just finished my first ever shirt and it hadn't been a complete success. But I said I would once I felt confident enough to make one for him.
Two and a half years later, he had one! 😂 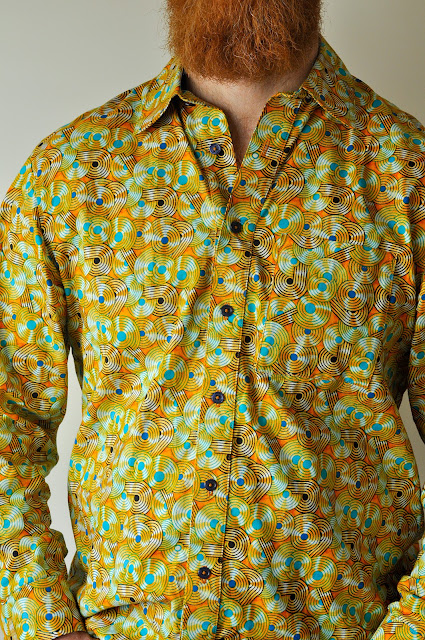 The pattern is Simplicity 1544. I was worried about making something for him because he's not very tall, he has a massive neck, wide upper body and short legs and arms. Haha! I know. After agonising over the finished measurements for ages, I decided to cut a straight 38 because that should fit his chest. If I had gone with this body measurements, I should have made a 42 - which would have been enormous on him. 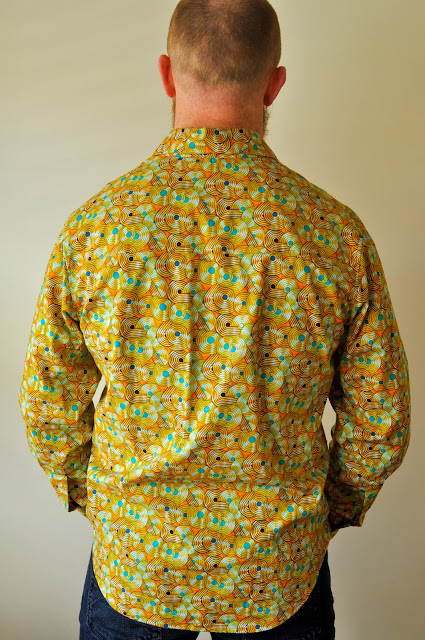 I knew the neck would be too tight and it is. He can't button it up. But I wasn't sure how to fit that. However, he was never going to wear his "Mandela shirt" (as he calls it) buttoned up so it didn't really matter. I took 2 inches off the arms and that was the only alteration I made. It fits him really well and he loves it. Plus, I think he can pull it off.
As soon as the shirt was ready, he made me take him to Fabworks and I have 2 cuts of fabric for some work shirts for him. I've not made them yet because I wanted to sort out the neck fit. 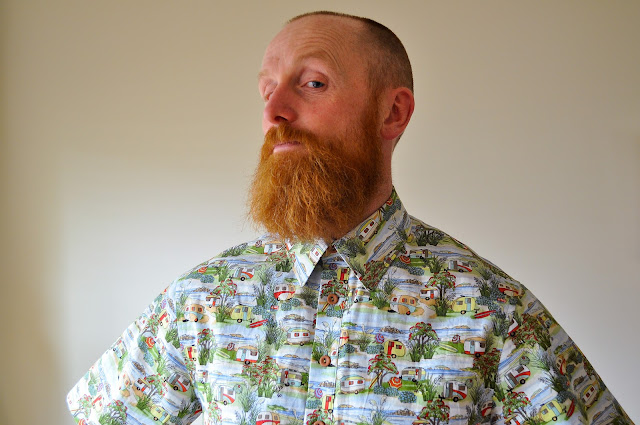 Fast forward to last summer when he found his perfect fabric. We have a caravan. During the summer, we're always going here, there and everywhere in it. On one of those weekends, he spotted this caravan fabric in a shop in Whitby and there was no way he was leaving it behind. He wanted a CARAVAN SHIRT OF DREAMS! 😁 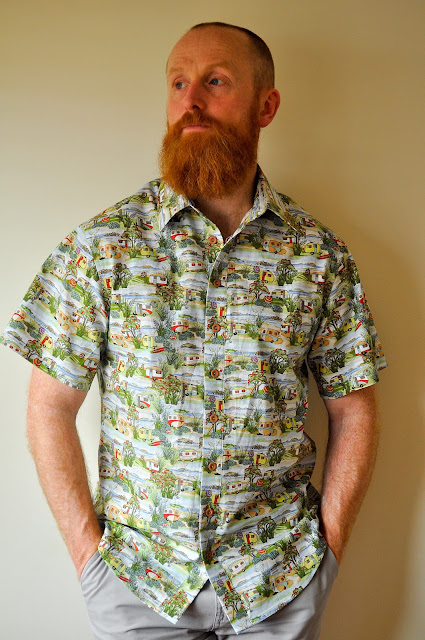 I am bloody proud of this one, to be honest. I had to go up to the biggest size on the pattern to fit his tree trunk neck - thanks, rugby! His chest is a size 38 but the 17-inch neck belongs on a size 42! To fix the neck issue, all I did was trace the bigger size neckline and blend the shoulder seam back to the size 38 on the front and back yoke pieces. Obviously, that affects the collar, collar stand and button band as well, which all had to be a size 42. 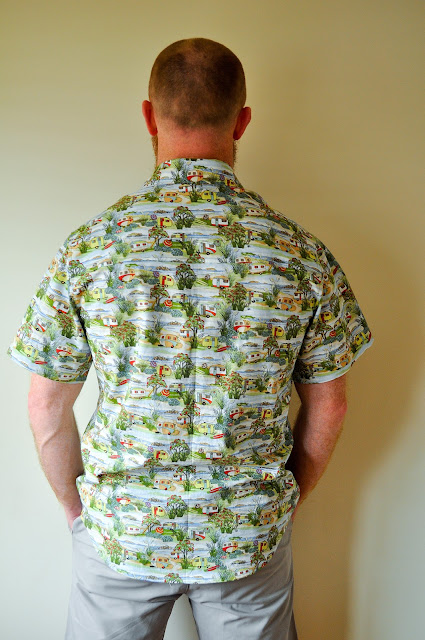 The pattern doesn't come with a short sleeve version so I measured the underarm seam of a short sleeve shirt he likes and shortened the sleeve piece to match that, plus one inch for turning up the hem.
Every single seam is flat-felled, including the armscye, so it looks amazing inside as well. I don't think I've ever finished something as neatly as this. Seriously, he could wear it inside out. 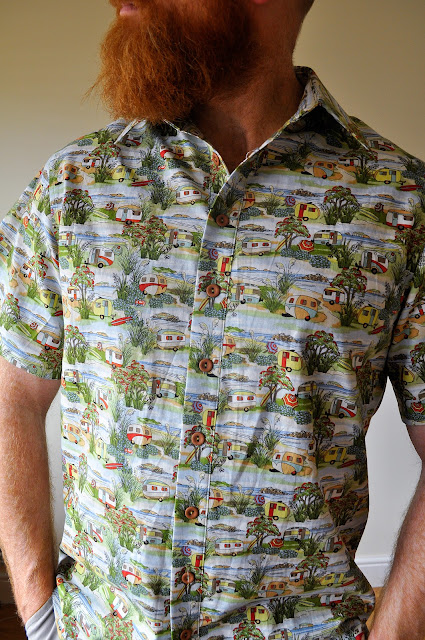 And as you can see in the first photo, this one actually buttons up so I can now make the other 2 for work he's been waiting for forever. But best of all, this is the FIFTH tick I've got on my #makenine for this year already!
I'll be back later this week with another Ivy dress that I made last week. Spoiler alert: I like it even more than the first one!
Yes, I did forget about the shirtdress I promised at the end of my last post. But that one has been waiting forever so a little longer won't matter too much. 😊 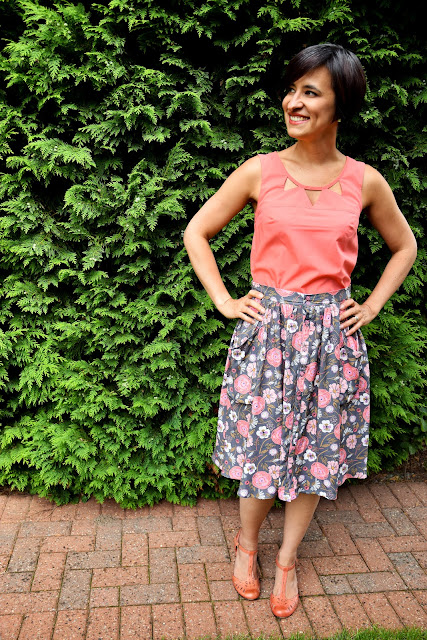 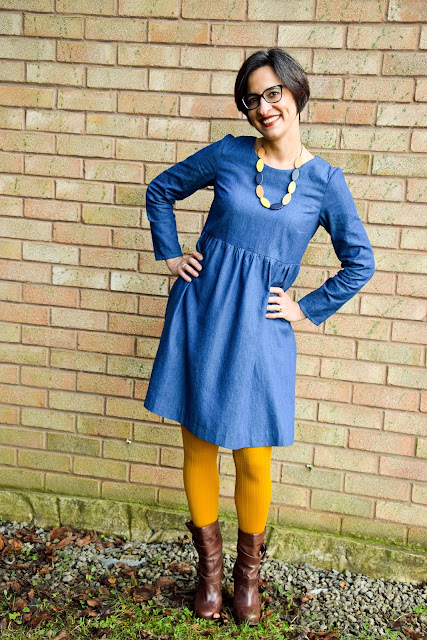